Does CBD Show Up On A Drug Test?

Does CBD Show Up On A Drug Test?

Does CBD show up on a drug test? That’s a question we often wonder. CBD oil has been a thing during the past decade. This cannabinoid, which comes from the cannabis Sativa plant has a wide variety of benefits for the health and many new uses and properties are surfacing every day. Though very popular, it has not been exempt from controversy.

The short, immediate answer would be, no, CBD chemical composition should not show up in a drug screening. However, sometimes CBD users are surprised by a positive on a test. How is that possible? It’s really about the presence of THC in the blend. But let’s first remember some facts:

Cannabidiol, most commonly known as CBD is one of the 113 cannabinoids present in cannabis plants. So far, clinical research on cannabidiol has been extensive and includes studies of CBD effects on cognition, pain, and anxiety among others. Though these studies have not been conclusive, we know that CBD products offer a variety of benefits for many health conditions and disorders. CBD oil acts on the endocannabinoid system, and it’s useful to help handle and alleviate chronic pain. People suffering from anxiety and depression find great and effective relief in CBD oil. And though there are no official records on this, evidence shows that CBD can help alleviate the general discomfort that goes with cancer treatment. And the alleged anti-seizure properties of CBD help to make life easier for epilepsy patients.

However, there seems to be some confusion about CBD. Does CBD have the same effects as marijuana? Will I get high if I consume CBD? Is CBD addictive? and ultimately, does CBD shows up on drug tests?

First, no. CBD is a non-psychoactive substance. That means it doesn’t get you high as marijuana does. The confusion often comes because people relate CBD with tetrahydrocannabinol. Though they actually are family, tetrahydrocannabinol or THC is the active compound in marijuana that produces the “high” effects. And though unlikely, it could be responsible if a drug test is positive for a CBD user.

During the last years, an improved understanding of CBD has paved the way for wider acceptance. However, the doubt remains; why a drug test would be positive for a CBD user? 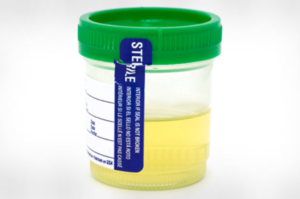 Can CBD Show Up in a Standard Drug Test?

Many times, all that stands between you and a fabulous job is a mandatory drug test. Should you, as a CBD user be worried about failing the test?

First of all, you must know something; in the most common drug screen performed by most workplaces, CBD is not the target. After all, CBD doesn’t affect judgment or impair motor skills. What can show up on a drug test and make you fail is the THC, the main active ingredient in marijuana, which can be present in low amounts in many CBD products and can remain in the human body for weeks after consumption.

From a legal point of view, employers have the right to maintain a drug-free work environment. That’s why they are legally allowed to test their employees and new applicants to find out if they use drugs.

Many companies do drug screening and testing for all potential employees. Reasons usually have to do with safety in the workplace and improvement in productivity. The underlying goal of these tests, though, is to identify any impairment that could potentially affect the employee’s performance. CBD oil, which is a non-psychoactive substance, doesn’t show up on most drug screening tests. Drug tests usually are not designed to detect CBD traces in the body.

The standard drug-tests used by many companies are 5-panel or 10-panel drug screening tests — both of these tests for THC-COOH (tetrahydrocannabinol and carboxylic acid). When metabolized in the body, THC turns into THC-COOH.

5-panel drug screening additionally tests for other mind-altering substances like PCP (phencyclidine), amphetamines or methamphetamines, cocaine, and opiates. The 10-panel screens test for benzodiazepines, methadone, propoxyphene, and barbiturates, as well as many recreational and pharmaceutical drugs.

Does CBD Show Up On a Drug Test If It Contains THC?

Each drug screening is different and has its own thresholds for substance detection. A urine test usually looks out for recent drug use. However, other tests like Hair tests detect chronic substance abuse.

Most industry-regulated CBD oil products coming from industrial hemp contain low amounts of THC. Generally, most full-spectrum CBD products contain less than 0.3% THC. Does CBD show up on a drug test if it’s full spectrum? That’s amount is almost negligible to be detected by standard drug tests. There are virtually no chances of it being detected by an employer’s drug screen tests. The average THC amount in CBD oil products is also too low to be detected by a hair test. In the cases of saliva or urine tests, the detection threshold is smaller.

So if you’re wondering why does CBD show up on a drug test, it will be due to a stronger THC presence in the products you’re consuming. That’s why you must always use regulated CBD products that come from legal, licensed manufacturers. Many times, unregulated products don’t specify the exact amount of THC present in your full-spectrum CBD products and can show up on standard drug tests.