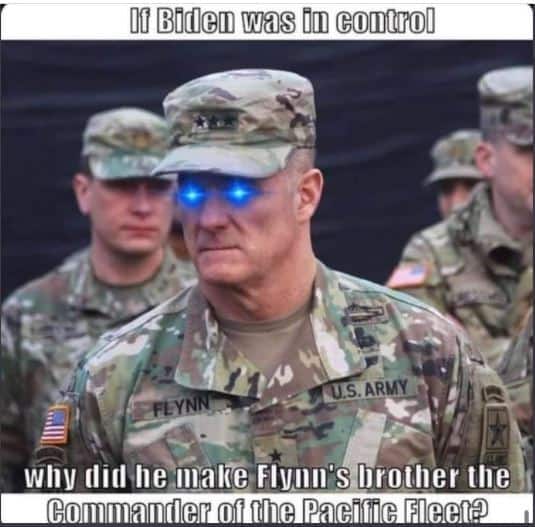 So on January 20th it looks like and appears that the Criminal and Child Molester Joseph Biden was elected as our 46th President and Commander in Chief. At the same time, it completely made all Q anon followers look like fools and nut case conspiracy theorist. I had previously written a thread about why Qanon could be a reverse psyop to keep people complacent and docile while the new world overtook over. You can read it here. https://isenselogic.com/top-10-reason-q-anon-could-be-a-reverse-psy-op/

One of the main warnings I sounded was the use of religion in the Que drops and how TRUST THE PLAN sounds a whole lot like HAVE FAITH. If you don’t already know I am thoroughly convinced that organized religion is a MILITARY grade psychological warfare weapon. I won’t go into it here but if you want to do some research you can start with this video. https://m.youtube.com/watch?v=zmEScIUcvz0

The other part of this story is in order for Qanon to be a trick TRUMP had to be in on it, or else he would have denounced it long ago. Now some in the underground INTEL community like Jim Stone Freelance and others are saying give up the only way forward is active kinetic engagement. But personally, I am in a holding pattern because a lot of shit is not adding up. For example,

Why is the Military surrounding the Capital Still?

Why hasn’t Biden been shown to board Air Force One Or Marine One yet?

Why did it look like Biden was being filmed in a fake white house, signing blank executive orders?

Why was General Flynn Brother just promoted to the commander of the Pacific fleet if they are so worried about assassination attempts from Trump loyalists in the military? 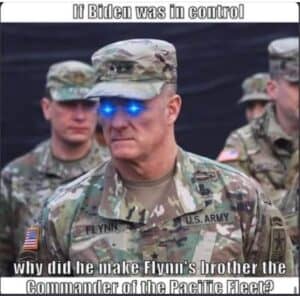 Flynn, who will be promoted to a four-star general if confirmed by the Senate, is stationed in Washington, D.C., and serves as deputy chief of staff in the Army’s G-3/5/7 section. It plans and coordinates the mobilization of the Reserve component in the continental United States.

He is the younger brother of Michael Flynn, who briefly served as a national security adviser in 2017. The elder Flynn pleaded guilty to a felony count of “willfully and knowingly” making false statements to the FBI during its investigation looking into ties between Russia and Donald Trump’s 2016 presidential campaign. Trump pardoned him in November.

Two things immediately pop out to me. He was in charge of the RESERVE component of the Army in the US, you know the same motherfuckers CURRENTLY SURROUNDING the capital? And he is being promoted to take over the PACIFIC side of the Army, the one most likely to come into conflict with CHINA… Coincidence???? And again the most obvious question you need to ask yourself, if Biden were truly Commander in Chief why would he make General Flynn’s brother commander of such a sensitive position.

There are all kinds of theories and rumors going on, the main one being is that Trump signed the insurrection action and handed over control of the government to the military and that he will come back and be sworn in as President by April 1st.  See: https://m.beforeitsnews.com/opinion-conservative/2021/01/simon-parkes-we-are-talking-about-a-peaceful-transition-from-donald-trump-to-donald-trump-must-video-3563964.html

My personal gut feeling is, that there is NO WAY the military would give control of our country to Biden unless our military is full of cowards. I don’t think they are. For right now we are in a wait and see mode. The other thing is if Q was being used to keep us pacified what is stopping us from going BUCK WILD NOW? Nothing, especially after Trump and the Q team, revealed for the whole world to see that our entire government and judicial system is corrupt all the way up to the Chief Supreme Court Justices. It doesn’t make sense you see? Why REVEAL all the corruption via Q and then say ha just kidding back to being slaves bitches.

Attorney Lin Wood Post a PDF of Biden’s Grandaughter Diary Where She States He Molested Her In The Shower. 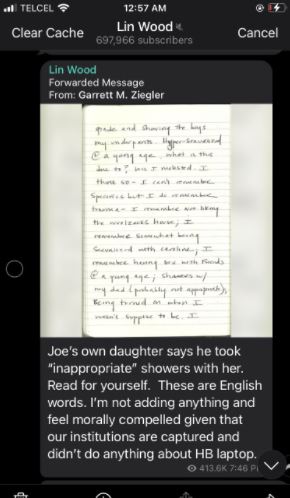 You download the entire PDF and read it at the above link. You see the problem is there is plenty of evidence that Biden and his son are pieces of traitorous shit, along with evidence written and video of them being pedophiles. Biden by his OWN MOUTH admitted to extorting Ukraine so how could any true Military American allow him to be commander in chief? It doesn’t make logical sense. Also, you have to combine the fact that the average intelligent person can see without a shadow of a doubt that they stole the election.

Evidence that Biden is not Truly in the White House Castle Rock? 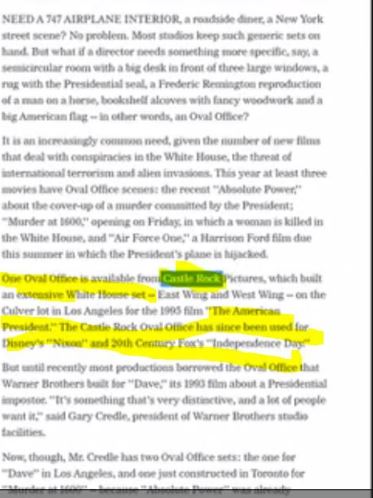 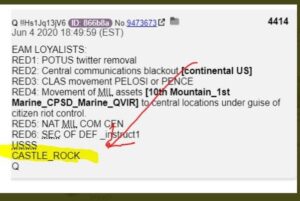 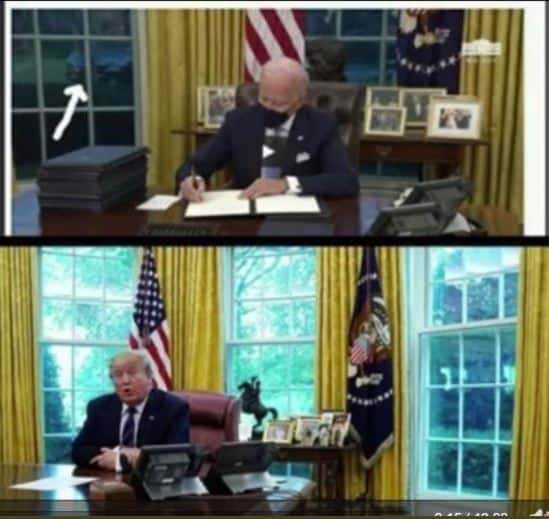 At first, when Q posted castle rock everybody assumed that was Camp David, but it turns out it is a Hollywood Studio that does recreations of the White House and the Oval Office,. You decide.

The Capitol Raid And The Second Impeachment of Donald Trump.

On January 6th a group of protestors stormed the Capitol building and MIRACOUSLY overtook security and entered the chambers of congress. Immediately the Congress blamed Trump and said his speech incited the violence, which is of course bullshit. Immediately like CLOCKWORK a majority of the senators who were going to veto the fraudulent election changed their mind without even waiting to see the evidence. There are many videos of the capitol police just opening the doors and letting the protestors in, even guiding them or where to go. There is even a video of a Senator opening the doors and letting them right on in.

Subsequently, two Capitol Hill Police officers committed suicide in the last two weeks. WTF does that tell you??? And this is what I don’t understand about all you deep state bitch bodyguards. Can’t you see they will kill you and your family as soon as they think you are a liability? Keep protecting them numb nuts and see how far that gets you.

There was one character who stood out during this whole MOVIE and that was the Q SHAWMAN. There were rumors that special forces were are of the raid on the capitol and their mission was to recover the laptops of Nancy Pelosi and other traitorous members of Congress. One report said that the Q Shawman didn’t wear a shirt to trick people into thinking he wasn’t WIRED FOR SOUND while his horns and upper headpiece for full of sophisticated surveillance equipment. Check out this video he posted just this week claiming he was part of the Navy Super Soldier Program.

“No one ever is selected by the puppet master to be the POTUS unless they agree to carry out an essential piece of the agenda.  Once they sign the contract to become President of the U.S. Corporation, they work for the Federal Reserve, not the American People.  So, it’s the foreign owners of the FED who always choose the POTUS.  However, that does not mean a POTUS, once installed in the Oval Office, cannot go rogue.  JFK did just that.  So did DJT.”

In conclusion, those following Q Anon are feeling like they were betrayed and burned, and SO FAR the optics seem to suggest that this is the case. However, there are subtle signs that this is FAR from over. The word on the street is that the deep state threatened to detonate a suitcase-sized nuclear bomb in DC if Trump didn’t surrender but I find that highly laughable. Why would you want to blow up the one place that gives you all the power? The most likely scenario is that Trump and the white hats did a strategic retreat and watched as the enemies committed treason so they can get an accurate count. Only time will tell. I think people should start drawing their red lines. Mine personally is forced vaccination on me or my kids.

Don’t forget to share if you find this aggregate information delicious and delightful….que-